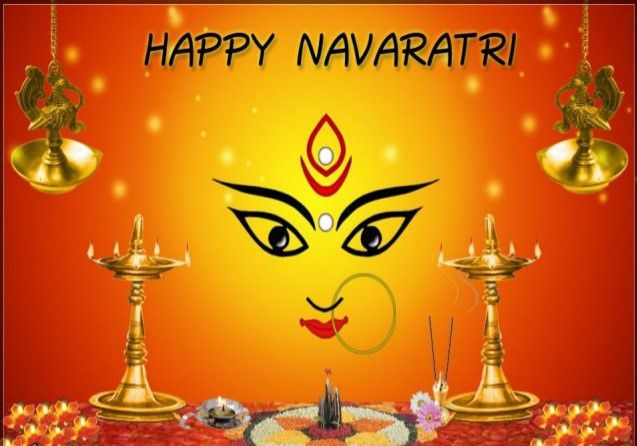 We entered into the time of Navaratri. Our festivities begin and we celebrate this auspicious time when the good always wins over the evil. This is the time which not only helps to minimise the negative energies, but, it also amplifies the positive energies. It is said that during Navaratri a portal to higher conscience is highly open and the spiritual practitioners are specially supported to proceed on her/his path of evolution.Navaratri is the time to meditate and focus within.

As part of a group of practitioners, during this Navaratri I dedicated my practice to the Chinnamasta. She is one of the 10 Female Cosmis Powers. She represents death, temporality, and destruction as well as, life, immortality, and recreation. Apart from the opening and closing ritual, the practice contained a 1 hour long mantra meditation twice a day for 9 days, and a fire puja, all dedicated to the Goddess Chinnamasta.

Navaratri is one of the greatest Hindu festivals. It symbolises the triumph of good over evil. The festival takes place each year at the beginning of the summer and at the beginning of the winter around the harvest time. These are very important junctures of climatic change and solar influence. Such junctions have been chosen as the sacred opportunities for the worship of the divine power. During both the times of the year, Navaratri is celebrated for 9 days.

Three different manifestations of the one Shakti is worshipped during this festival in form of Goddess Durga, Lakshmi and Sarasvati. By worshipping the divine feminine, we invoke the energy aspect of God in the form of the Universal Mother. The festival celebrates femininity in all its forms.
&nbsp

Navaratri is divided into sets of three days to cherish the different aspects of the Divine Feminine.

The first 3 days are dedicated to Goddess Durga. Goddess Durga is a symbol of power. The name Durga literally means the remover of the miseries of life. She represent the energy, which helps God to proceed with the work of creation, preservation and destruction in order to destroy all our impuritites, vices and defects.

The second 3 days are dedicated to Goddess Lakshmi. Lakshmi is the embodiment of a giver of spiritual wealth. She is considered to have the power of bestowing on her devotees the inexhaustible wealth.

During the third 3 days, the Goddess Saraswati is worshiped. Saraswati is the Goddess of wisdom. In order to have all round success in life, we need the blessinggs of all the three aspects of the divine mother. Hence, the worship for nine consecutive nights.

My initiation and experience with Chinnamasta started right during the first hours of meditation. Even though I am used to do mantra meditation, this seemed to be a short cut to coming into alignment with the mantra. I do love mantra meditation! It is so powerful and special practice that I like to take every opportunity as a sadhana.

Very soon after I started with the meditation practice, I entered into a state of ecstasy. I was sitting there still, repeating the mantra, without physical movement, while my soul was moved by the energy of the mantra. It felt like internally I was expending, flying, I was filed up with joy and happiness. My breath slowed down and I saw myself from outside as my jaw dropped down. I felt like closing my mouth or breathing would break the flow of the experience of bliss. I almost didn’t feel the need to breathe. It was almost like entering into a breathless state when everything seemed to stop externally. Even though I was aware of what was going on around me in the temple, I wasn’t disturbed with it. I was absorbed into what was happening within me.

My mind was still active. I kept repeating the mantra internally, which showed me myself from outside sitting there. I noticed that my breath slowed down and I just wished to stay in that moment, extending the experience.