Covid hit me right in the gut.

Home » Uncategorized » Covid hit me right in the gut. 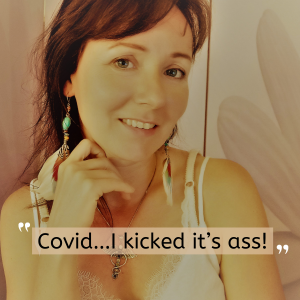 Covid hit me right in the gut.

It punched me in the chest and the head.

And I kicked back at it. I had to.

I didn’t get a vaccine because I didn’t want to.

I trusted my immune system and now it had to prove that it was trustworthy.

Covid and I had been fighting each other for more than 2 weeks now.

And finally I got to kick its ass!

It was nasty and tried to play a lot of tricks on me.

It started with fever and pounding migraines that lasted for days.

Then it continued with such strong pain in my spine and hips that even laying on my tummy was unbearably painful.

However the weakness was the worst.

On 𝗱𝗮𝘆 𝟴 I started coughing and lost my sense of smell and taste.

And that’s when the fear kicked in!

Suddenly I remembered the stories of people who no longer had the capacity to breathe, who were being hospitalised and put on ventilators…and that’s where it ended.

Fighting Covid both physically and mentally was a strange game!

Obviously the last thing I needed was the mental energy leak of weakening myself with the fear of dying.

I also remembered that meditation would probably help with the fear. But I felt too weak to sit in meditation.

I plugged the leak with “Om Namaha Shivaya”, my long-time favourite mantra. This mantra can heal everything and it can even help yogis to beat death.

“𝐎𝐦 𝐍𝐚𝐦𝐚𝐡𝐚 𝐒𝐡𝐢𝐯𝐚𝐲𝐚” was my mental medicine. I prayed to Shiva, the great Master of the yogis, to fight off the fear of decline. Alongside which I also took medicine for my body such as high doses of Vitamin C, Zink, Vitamin B and ginger.

PrevPrevious PostSelf-care isn’t being selfish
Next PostHAVE YOU EVER WONDERED WHY PEOPLE CHOOSE TO BECOME FACILITATORS?Next